In a class of 30 kids from both Year 5 and 6 in British School, Ms. Palmer brought up the final game at the end of Friday afternoon. We had 10 minutes left until I get to go play games at home.

We had these sessions at the end of the week that vary. It could be a game, a chance to share music, or a talk by a guest. This time, two of the classes came together to play.

“Right everyone, this is called the Hot Air Balloon game!” Ms. Palmer said. (I couldn’t remember the proper name, so let’s go with this)

“It’s very simple, and it works well because you’re already split between 4 groups. Pretend you’re all in a really big hot air balloon. Each group is a different job: we have the doctors, the mechanics, the soldiers and the clowns.”

The groups had different reactions to their jobs. The boys would nod to being soldiers, and the girls would smile that they could save lives. There was an indifferent reaction to mechanics, but I wanted to focus on the clowns. That was us.

The first half of the game was an in-group discussion. We had to talk about what we really do in our chosen jobs. The soldiers had varying answers from protecting to killing. The doctors were saving lives obviously, and the mechanic had maintenance and engineering to help them with anything else that comes up.

All we did was laugh. We were clowns. What else was there to do? There was no discussion. We knew what we were.

The second half took no less than a minute.

“Okay!” Ms. Palmer said. “Now, here’s the real game: the balloon is going down! We’re too heavy. We threw out everything we don’t need, and there’s just us left. Talk amongst the class and decide which group should jump off the balloon!”

The leader of our clown group, the funniest guy in the class said: “Ah we know already! It’s us!” And he threw his hands up in the air and pretended to fall off his chair, as if he did jump off the balloon. Everyone laughed.

That was the conclusion. They had decided without a word of discussion: throw out the clowns. The bell rang and that was it.

I still sat there. Of courses, I didn’t want to throw myself out to the wolves for ridicule, but in my head I asked:

Why throw out the clowns?

I had so many questions. But my sense of shame at the time stopped me. I might be seen as stupid.

That was that. I played out the discussion in my head. But I wanted answers:

Yes there are flaws to these thoughts. You can break apart my question very easily. We can weigh the pros and cons of taking out a different group. The problem I have was the general class acceptance of this decision.

Not a SINGLE discussion. Nobody will fight for them. Immediately everybody was utilitarian.

But it’s not like there was a war going on. If there was one, the balloon would have been shot down already. Where is the enemy in our skies?

Skills can be taught too: maintenance can be a shared responsibility, and basic first aid can be normalized across the class. We can learn these things through experience, and what else is there to do in a wandering balloon anyway.

What about all those days and nights in the balloon? Up high there in the sky? We’ll hear explanations from the mechanic. We’ll hear gory medical cases from the doctors. We’ll hear traumatic experiences and hard boiled practice from the soldiers. And what are you left with? Silence. Nothing. Just the swirling of our thoughts and our wandering lives. These jobs have fought to keep us alive, but who will fight to help us face life itself?

We have disregarded them because all they do is make us laugh. Defined their value by their contribution to balloon society. I thought discussion would give us a fighting chance. We are humans first, clowns second. But bell had rung, and discussion was over.

The clown, comedian, entertainer, influencer, fantasy writer, and creator: they are all variations of jesters. Their true role is to serve as coping mechanisms.

Find ways to keep you engaged through laughter, thinking, influence, action and more. Because who else will entertain us, ourselves?

For clowns, they play the tragic character and pull our attraction towards them. They are masters of reminding you to pity them and laugh at their jokes and be dazed by their circus abilities. Otherwise, if they weren’t there, who else will you pity and laugh at and be dazed by other than the mirror in front of you?

The burden of silence is too great for many to bear. We get intercepted by the negativity of our own thoughts quite often. It’s why we have an inherent desire to seek calming environments through activities like meditation or read philosophical literature to understand ourselves better.

We entertain ourselves through drips of hedonism, as without them we’re uncomfortable with discovering who we are. Our phones are digital clowns hitting us with a dose of dopamine. We laugh and cry at the things we discover in the skies, and we engage with these performers as we wander around in our hot air balloon. How else do we kill the time?

We are our own clowns

In times of peace, we are at war with ourselves. We make effort to characterize the voices that shout in our heads. Internally we run through conflicts that harm us, oppress us, keeps us on our feet. In modern society we look for solace in cat videos, memes, and drama happening all over the world. They are easier to read and bear than the ones inside us. The conflicts can be too much and we need a break at times.

Because nothing is scarier than being left to our own demises once everything is gone. The clown is our last bastion to that: the ones we laugh at online, and the voice that speaks for comedy in our heads. Maybe that’s why we have eyes looking outward. The ones looking in are sewn shut from birth to protect ourselves, but I digress.

Why should I throw out the clown? I don’t have a good answer for this. I probably never will.

Otherwise, once the mechanic can’t fix the balloon, the doctors have run out of medicine, the soldiers are out of bullets, the skies are burning red and we’re on our way down to the ground...

I’d want to end all this on a good old belly-aching laugh. 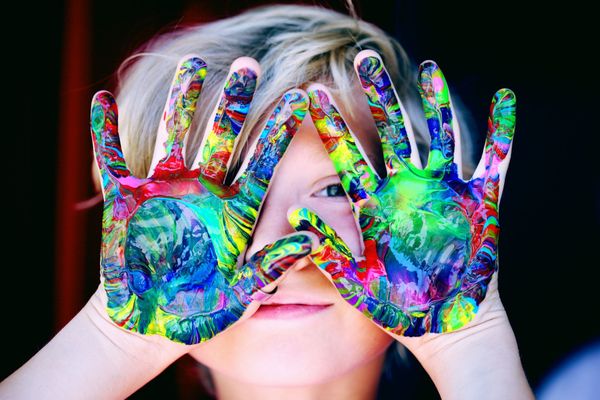